Bioinformatics and Computational Biology are new fields in Biology and Biomedicine using classical toolboxes of algorithmics but also are providing new methods to solve original problems in Biology.

The typical first algorithms encountered in Bioinformatics are related to the alignment problem. How do you find and score the alignment of a sequence substring to any other sequence of reference ? A first description of important algorithms is presented hereafter:

We provide in the following link here a brief practical introduction to those algorithms with practical illustrations of implemented programs in Python.

In the following sections, we deal with specific topics in Bioinformatics and Computational Biology of interests to curious biologists :

Hidden Markov Models are a popular machine learning approach in bioinformatics. Machine learning algorithms are presented with training data, which are used to derive important insights about the (often hidden) parameters. Once an algorithm has been suitably trained, it can apply these insights to the analysis of a test sample. As the amount of training data increases, the accuracy of the machine learning algorithm typically increases as well. The parameters that are learned during training represent knowledge; application of the algorithm with those parameters to new data (not used in the training phase) represents the algorithm's use of that knowledge. The Hidden Markov Model (HMM) approach, considered hereafter, learns some unknown probabilistic parameters from training samples and uses these parameters in the framework of dynamic programming to find the best explanation for the experimental data. Our final target here is to find gene promoter sequences inferred from the so-called CpG islands.

Suppose you are given the dinucleotide frequences in CpG-islands and the dinucleotide frequences outside CpG islands. Design an HMM for finding CpG-islands in genomic sequences. Apply your algorithm to a sequence mined from the Human Genome reference in a given gene of interest and check if there are CpG islands that are associated to the gene or to some of its switches ?

What are CpG islands and how to track them using a Hidden Markov Model?

It is sometimes relevant to predict the presence of genomic DNA features such as promoters, enhancers, silencers, insulators and locus control regions. Such regulatory elements are called cis-regulatory modules or cis-regulatory switches. Identifying them is difficult compared to finding protein-coding genes because the DNA sequences of interest may be very short (e.g. a dozen base pairs for transcription factor-binding sites).

The dinucleotide CG is often referred to as CpG (p denotes the phosphate linkage between two desoxyriboses residues). CpG islands represent an example of a regulatory element that are found in around \(70\%\) of the genes of eukariotic chromosomes. The dinucleotide cytosine followed by guanosine (CpG) is approximately five-fold underrepresented in many genomes, partly because the cytosine residue can be exchanged for thymidine by spontaneous deamination, as shown in the figure on the right (credits: Strachan, T. and Read, A. Human Molecular Genetics. 4ed. (2011), Box 9.1. Figure 1, p.262). CpG dinucleotides are gradually being replaced by TpG and CpA. That is the reason why they are underepresented, unless other selection forces act upon preserving the CpG dinucleotides.

Cytosine residues on CpG dinucleotides are often methylated. This in turn leads to the recruitment of protein complexes that include histone diacetylases capable of removing acetyl groups of histones and therefore inhibiting active transcription. Why is that? Acetylated histones carry negative charges on the \(-CH_3-COO^-\) groups repelling the negative charges of the external phosphates groups in the double stranded DNA. So when the acetyl groups are removed from histones associated to particular methylated regions in dsDNA, these regions tend to better bind to histones, preventing access of transcription factors on these regions of the DNA. Hence, unmethylated CpG dinucleotides do not recruit histone diacetylases and so enable easier access of transcription factors to the dsDNA without having to deal with histones high intensity binding to the DNA sequence to be transcribed. CpG islands are regions of high density of unmetylated CpG dinucleotides and are commonly found in upstream (5') regulatory regions near the transcription start sites of constitutively active 'housekeeping' genes.

By one criterion, a CpG island is defined as having:

As an example here, we will focus on the GDF15 gene (Growth Differentiation Factor 15). The UCSC Genome browser shows this gene is on the forward strand of chromosome 19, band p13.11. In the human genome reference GRch38/hg38, the physical position is located between 18.385 Mb and 18.450 Mb. The UCSC browser shows there are 2 exons and 1 intron for the GDF15 gene (exon 1 is 309 nt starting at bp 18,386,158 and exon 2 is 891 nt starting at bp 18,388,286). By checking 'show' in the CpG islands option in the 'regulation' section of the UCSC Genome browser, two CpG island sequences are indicated in the gene. We will try to retrieve these CpG islands after importing the DNA sequence locally on a laptop in FASTA format and screening with a self-made HMM algorithm in Python.

This GDF15 gene encodes a secreted ligand of the TGF\(\beta\) (Transforming Growth Factor-\(\beta\)) superfamily of proteins. Ligands of this family bind various TGF\(\beta\) receptors leading to recruitment and activation of SMAD family transcription factors that regulate gene expression. The encoded preproprotein is proteolytically processed to generate each subunit of the disulfide-linked homodimer. The protein is expressed in a broad range of cell types, acts as a pleiotropic cytokine and is involved in the stress response program of cells after cellular injury. Increased protein levels are associated with disease states such as tissue hypoxia, inflammation, acute injury and oxidative stress.

What is a Hidden Markov Model?

To design a Hidden Markov Model (HMM) algorithm to detect CpG islands in a genomic sequence, we first recall, in an intuitively simple way, what a HMM is, as nicely explained in the book by Jones and Pevzer, taking the fair bet casino example.
Credits: Jones, N.C and Pevzner, P.A. An introduction to Bioinformatics Algorithms. Chap. 11: Hidden Markov Models. MIT Press, 2004.

An HMM can be viewed as an abstract machine that has the ability to produce some output using special coin tossing. The operation of the machine proceeds in discrete steps: at the beginning of each step, the machine is in a hidden state. There are \(k\) such hidden states. During the step, the HMM makes two decisions:

In our CpG island example, there are 2 hidden states (are you in or are you out of a CpG island?) and the alphabet is the set of all possible pairs of nucleotides (there are 16 such pairs: AA, CC, GG, TT, AC, AG, AT, CA, CG, CT, GA, GC, GT, TA, TC, TG). Depending on whether or not the hidden state is a CpG island, the probability to emit the particular dinucleotide CG will not be the same as compared to the other dinucleotides elements of the set.


The HMM decides on question (1) by choosing randomly among the \(k\) states (possibly by following a multinomial distribution: each of the \(k\) states are not necessarily chosen with the same probability, or by following a uniform distribution if all hidden states were equiprobable); then it decides on question (2) by choosing randomly among the \(\Sigma\) symbols. The choice that the HMM makes are typically biased (the uniform distribution is not mandatory). One key feature of a HMM is that the probability distributions that govern which state to move to and which symbols to emit change from state to state. In essence, if there are \(k\) states, then there are \(k\) different 'next state' distributions and \(k\) different 'symbol emission' distributions. Another important feature of HMM is that an external observer can only see the emitted symbols but has no ability to see what state the HMM is in at any step, hence the name Hidden Markov Model. The goal of the observer is to infer the most likely states of the HMM by analysing the sequences of emitted symbols. Since an HMM effectively uses dice to emit symbols, the sequence of symbols it produces does not form any readily recognizable pattern. 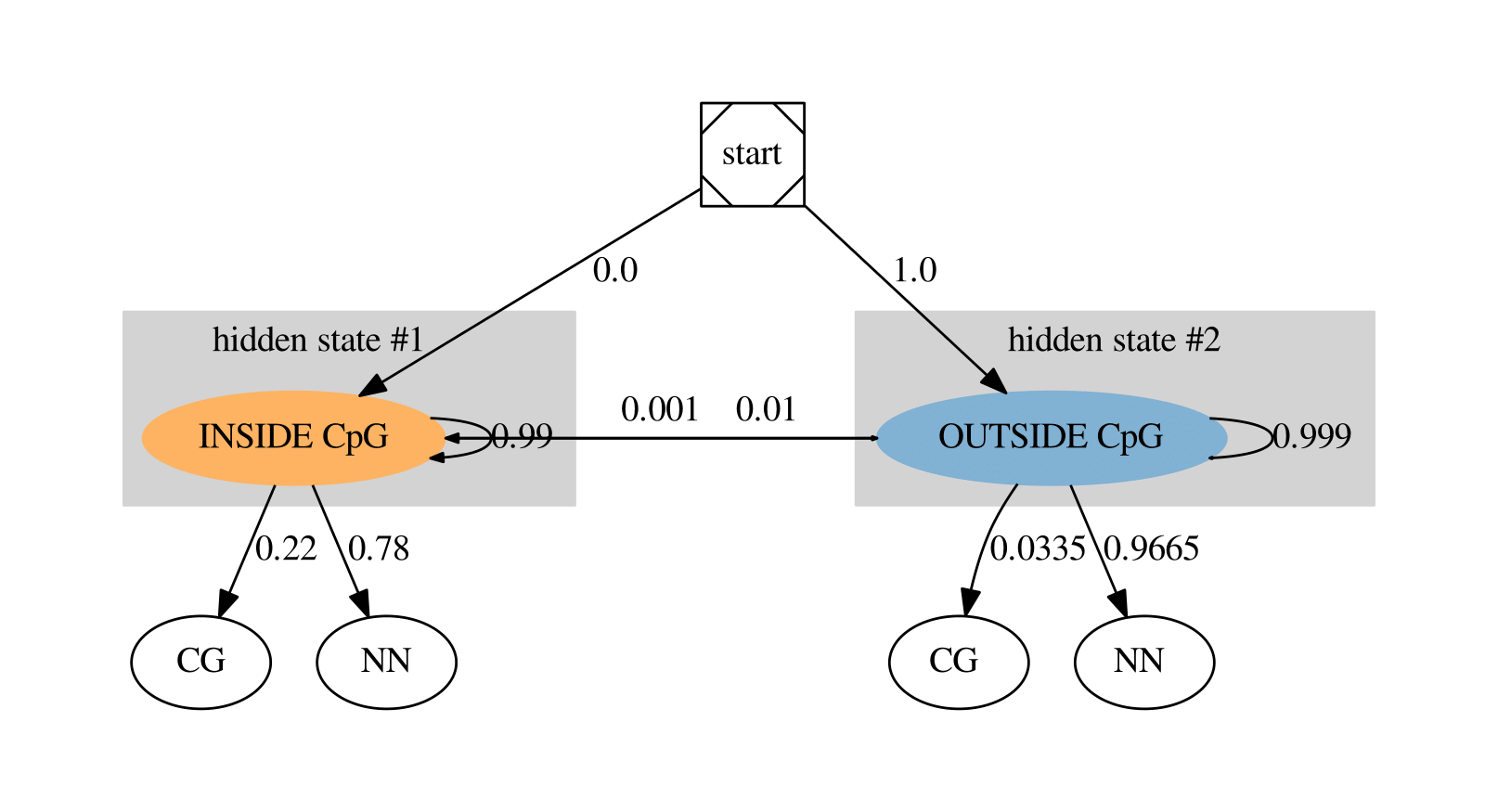 The HMM has to start somewhere and we hypothesized that the first hidden state will always be outside a CpG island (see the probability label next to the edge from 'start' to 'outside CpG island' in the figure above).

One of the first algorithm developped for HMM decoding and parameter estimation is credited to Andrew Viterbi in the 1970s. Pierre Baldi, Gary Churchill and David Haussler pioneered the application of HMM in computational biology.

What is the HMM decoding algorithm? 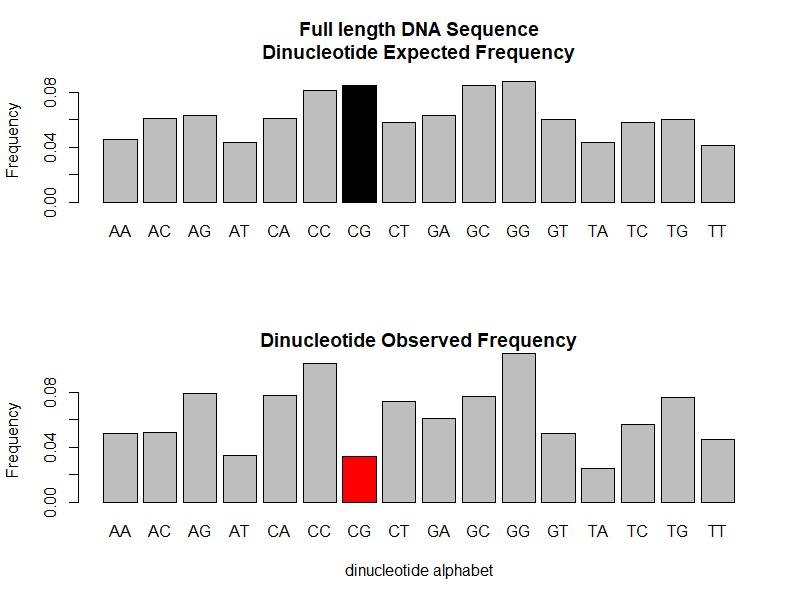 The length of the sequence is 65,001 nucleotides (\(\sim\)65 kbp).
The single nucleotides observed frequencies are:

The percentage of C or G in the DNA sequence is The observed frequencies for the dinucleotide alphabet are:

The comparison between observed and expected dinucleotide alphabet frequency distribution is displayed on the barplot above. The CG dinucleotide is clearly underepresented in the full length DNA sequence as can be seen by comparing the black and red bars. The observed frequency for CG is 0.0335 (red) while the expected frequency would be 0.0848 (black) under the assumption of a random combination of C and G following the multinomial distribution for the single nucleotides abundance in this DNA sequence.

Observed \(\chi^2_{obs.}=4,669.5\,\gt\,\chi^2_{theo.}=16.9\) for the theoretical chi-squared with 9 degrees of freedom at 95%-signification level.
\(H_0\) is rejected with a p-value = 2E-16. The dinucleotides are not random combinations of two single nucleotides and are not identically distributed. The larger discrepancy between the observed and expected frequency arises from the CG dinucleotide (CG associates to the largest Pearson's residual). 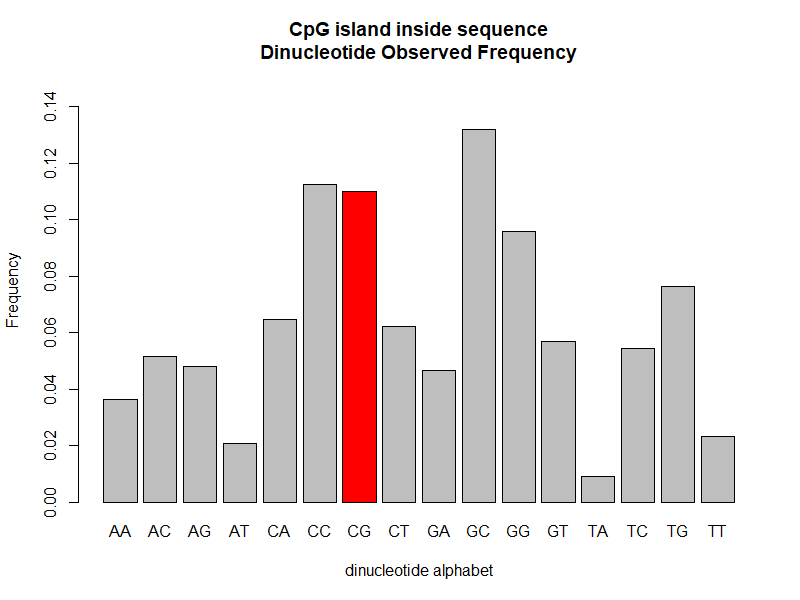 It is worth noticing that the CpG island of 600 nt referenced in the UCSC Genome browser with 65% of GC content is ending at the very same position as our second detected CpG island.
In the full length of the 64,177 nucleotides of the investigated sequence, 12 CpG islands have been detected by our HMM algorithm that fullfill all criteria of the CpG island definition.

Code extracts that produced a solution in Jupyter notebook format:

Hints for a solution and results

How to do it ? This page is under construction.

Code extracts that produced the solution above:

TASEP is a stochastic model for the protein elongation rates of ribosomes on mRNA.
This page is under construction.

Hints for a solution and results

Code extracts that produced a solution on GitHub: